Archive for the ‘ps4’ Category

Sony has issued a rare denial in response to a recent report from Bloomberg suggesting the company has cut back production of the upcoming PlayStation 5 due to component shortages.

“While we do not release details related to manufacturing, the information provided by Bloomberg is false," the company said in a statement provided to GamesIndustry.biz. "We have not changed the production number for PlayStation 5 since the start of mass production."

Bloomberg's report cited "people familiar with the matter" to suggest that the company was lowering its expected worldwide console production from 15 million down to 11 million for the fiscal year ending in March 2021. That's due to "production yields as low as 50% for its SOC," according to the report.

Last month, 505 Games announced that it was "unfortunately unable to offer an upgrade path to all existing [console] Control players" for PlayStation 5 and/or Xbox Series S/X enhancements. Today, though, an apparent temporary snafu is showing just how simple such a free upgrade could be for many Control players on current-generation systems, at least.

As reported in a lengthy ResetEra thread, a number of players who previously bought the Control Digital Deluxe Edition on PS4 were surprised last night to find they also owned the Control Ultimate Edition. That new version includes the base game, DLC, and season pass and is the one that "take[s] full advantage of the power and features provided by these new consoles," as 505 Games puts it.

Within hours, though, those same players noted their Ultimate Edition ownership had been revoked and reverted back to the current-generation Digital Deluxe Edition. That version will not get any hardware-specific enhancements when played on next-generation consoles.

Console gamers looking to upgrade to a new system at the end of the year likely have a few major questions about how their existing game libraries will work across console generations, such as:

The answer to those questions varies greatly depending on the platform and publisher involved, and answers for some specific games are still unknown. That said, here's a handy guide to where various cross-generational game compatibility and upgrade plans stand at this point.

At a basic level, both Microsoft and Sony are taking steps to ensure that most (if not all) of your current-generation console game library will be playable on their new consoles.

When Untitled Goose Game finally sees a physical release later this year (after a highly successful digital launch last year), it will also see the debut of a new line of "eco-packaging" that publisher iam8bit says it "hope[s] leads an entire industry into the future."

Iam8bit's so-called "Lovely Edition" release of the game will be the first PS4 title to eschew the standard plastic Blu-ray DVD case in favor of a cardboard box made with "100% post-consumer, recycled material with heavy duty 20-pt stock and no harmful inks." The packaging also makes use of a biodegradable plastic shrinkwrap called biolefin, which breaks down into biomass after just one to three years, instead of the usual 300 to 600, according to its manufacturer.

The eco-friendly decisions extend to what comes inside the game box, as well. A booklet and foldout poster included in the package get their paper from sources certified by the Forest Stewardship Council, ensuring the wood "comes from only the most well-managed and environmentally responsible forests," as iam8bit puts it. And the included "No Goose" sticker is made from sugar cane waste, which the company assures us is fully biodegradable but not as delicious as it sounds.

You won't be able to use Sony's DualShock 4 or other third-party PS4 gamepads to play PlayStation 5 games, Sony confirmed in a blog post today.

Those older gamepads will still work with "supported PS4 games" running on the PS5, Sony said, and PS5 software will work with "specialty peripherals" designed for the PS4—including "officially licensed racing wheels, arcade sticks, and flight sticks." Those caveats highlight the fact that there's no technical limitation or communication protocol mismatch stopping the upcoming hardware from communicating with legacy controllers.

But Sony says it "believe[s] that PS5 games should take advantage of the new capabilities and features we’re bringing to the platform, including the features of DualSense wireless controller." Those features include what Sony is calling "haptic feedback and dynamic trigger effects" and a built-in microphone (last month, Geoff Keighley hosted what is, thus far, the only public hands-on impressions of these new controller features).

On Tuesday, sim-racing options for the Xbox One and Playstation 4 just got a little more diverse with the release of Assetto Corsa Competizione. The game is a companion of sorts to the well-established PC racing sim Assetto Corsa, developed by Italian studio Kunos Simulazioni. First released on the PC in 2019, ACC is a much more narrowly targeted game than its older sibling—this game is focused on a single category of racing, called GT3, which uses modified versions of exotica you might see on the road (or reviewed here at Ars) like Lamborghini Huracáns and Acura NSXs.

ACC is also the official game of GT World Challenge, a collection of race series' held around the world by an organization called SRO. That kind of hyperspecific demographic makes sense in the PC world, where most hardcore sim racers live, but the people at Kunos have ported their game to both the PS4 (which we tested) and Xbox One—consoles that have traditionally been better served by more accessible driving games.

I've heard good things about the fidelity of Assetto Corsa over the years, and so I was eager to try out the franchise's console debut to see how it stacks up.

Just last week, the LucasArts-era PC cult classic Star Wars Jedi Knight: Jedi Academy was ported to PlayStation 4 and Switch. Apart from some iffy menus, it's largely a decent port with a good control scheme, high-resolution graphics, decent framerates, and all the content present. It even has multiplayer!

But that last point has become something of a problem, as veteran PC players have found a way to enter console lobbies, and they're crushing the newer Switch and PS4 players.

It's made possible by the fact that the console ports' multiplayer servers appear to work the same way as their PC counterparts have for almost two decades, and the IP address for each server is exposed to the user. PC players can use that IP address in the Windows version of the game and join a Switch match. Forums like ResetEra have console players complaining that PC players are trolling them and that the invaders have an unfair advantage.

The days leading up to Valentine's Day can be stressful. The Hallmark holiday sneaks up on us after the collective hangover from the winter holidays finally disappears—before you realize the tinsel's been tucked away, you're scrambling to buy flowers, chocolates, jewelry, and the like. But instead of spending money on expensive gifts that your partner may only enjoy for a finite amount of time, we at Ars want to encourage you to spend quality time together—and what better way to do that than to pick up the joysticks and play some video games?

While there's a lot of emphasis in the video game community on online multiplayer and the ease of being able to play with friends regardless of your location, it's always fun to share the experience with the person you love most while being literally right next to them on your own couch. Below we've gathered some of our favorite couch co-op games, which span across platforms and range from hardcore to beginner-friendly. They should allow seasoned and less experienced gamers alike to spend a couple hours this Valentine's Day vacuuming up ghosts, preparing meals, battling underground monsters, defusing bombs, and racing to the finish line. Regardless of your skill level or game of choice, the time should be more special because you're spending it together (aw). 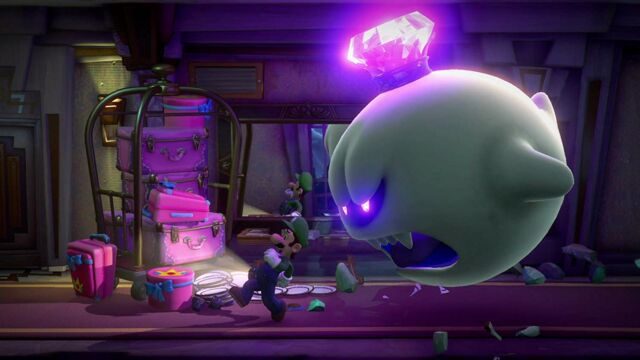 Luigi's Mansion 3 tasks Mario's sheepish little brother with rescuing his friends from the clutches of a haunted hotel. Its two-player mode doesn't become available until an hour or so into the story, but at that point the rest of the game becomes one of the most accessible co-op campaigns in recent memory.

Today is Black Friday, and that means a lot of video game deals. While the annual shopping event is still filled with offers that push mediocre products or prices that aren't particularly low, many of the gaming deals the Dealmaster has found across various retailers are genuinely worth your time.

On the PlayStation side of things, that includes $100 off the 4K-ready PlayStation 4 Pro, with the standalone console and a bundle that includes Call of Duty: Modern Warfare currently down to $299. The standard "Slim" PS4, meanwhile, is down to $199; that's about $80-100 off where we normally see it online, but Sony is packaging God of War, Horizon Zero Dawn: Complete Edition, and The Last of Us: Remastered with the console as part of its holiday season bundle. For context, those three games usually sit in the $10-20 range these days. (All of them are also pretty good, if you haven't tried them already.) This deal does appear to be running out of stock pretty quickly, though.

A bundle of the company's PlayStation VR headset that includes two games and two PlayStation Move motion controllers is also discounted to $250. That's roughly a $100 discount and about as low as we see it at major retailers. An additional bundle that included five games but no Move controllers was available for $200 earlier this week, but that unfortunately looks to be out of stock at major retailers on Black Friday itself.

Sony has a PlayStation Now problem

Today, every major gaming company and its subsidiary cousin is aiming to be the "Netflix of games" in some form or another. Xbox Game Pass, Apple Arcade, Google Play Pass, Ubisoft's UPlay+, EA Access, and even Nintendo's Switch Online all bundle together access to dozens or hundreds of games for one low monthly fee.

And then there's PlayStation Now. Sony's service started offering monthly subscription game bundles back in the beginning of 2015, long before most of the competition. But a mix of confused marketing and limited access to Sony's own first-party catalog has left the service to languish with just 700,000 subscribers as of May (compared to a reported 9.5 million monthly subscribers for Xbox Game Pass). Despite its head start, PlayStation Now runs the risk of being lapped by the subscription competition in the market and the public consciousness.

When PS Now was PS Then

Many of PlayStation Now's problems can be traced back to its launch. Back in 2014, the service introduced itself by charging ridiculously high, single-game, time-limited rental rates for streaming access to a small selection of PS3 classics. After just a few months, that changed to an all-you-can-stream subscription model that included functional streams of 100 PS3 games for $15 to $20 a month.