Archive for the ‘vaccine’ Category

Amid raucous protest from hundreds of anti-vaccination advocates, state lawmakers in New Jersey have abandoned legislation to ban vaccination exemptions based on religious beliefs.

The bill, S2173, collapsed in the state Senate Monday as lawmakers realized it was a single vote shy of passage, according to The New York Times. The defeat came after a last-ditch effort to amend the beleaguered legislation, which ultimately generated new opposition.

S2173 would have prohibited parents from using religious beliefs as an excuse to get out of providing standard, life-saving immunizations for their children. Instead, only children with medical conditions that preclude a child from being vaccinated—as outlined by the Centers for Disease Control and Prevention—would be granted an exemption.

Flu activity has been elevated since the start of November and is only expected to continue climbing, the Centers for Disease Control and Prevention reports in its latest flu update. That's a few weeks earlier than in past years.

Flu season in the United States can ramp up in the fall and peak anywhere between December and March, then drag itself out as late as May. In the last 36 years, flu most often ramped up in December and January and peaked in February. But for this winter, the CDC says there's a 40 percent chance the flu will peak in December based on activity so far.

Unvaccinated Samoans must identify themselves with red flags, officials say

People who have not been vaccinated against the measles virus must mark their homes with red flags, Samoan officials announced Tuesday.

The decree comes amid a devastating outbreak of measles, which was declared in October. As of December 3, officials have recorded 4,052 cases, 171 of which were recorded within the 24 hours before the tally. Officials also reported 60 deaths, 52 of which were in children aged 0 to 4 years old.

The outbreak has flourished after the vaccination rate of infants plunged to an estimated 31 percent last year. Health officials linked the drop in vaccination to the tragic deaths of two infants, who were given measles vaccines tainted with fatal doses of muscle relaxant. Two nurses were convicted in the cases and sentenced to five years in prison. Despite the convictions, anti-vaccine advocates have used the cases to drum up fear of vaccines.

The annual flu shots that are free to those with health insurance are not immune from the convoluted and contemptible price-gouging that plague the US healthcare system.

Health insurance companies pay wildly different amounts for the same vaccines depending on how negotiations go with individual medical providers across the country. In some cases, providers have forced insurers to pay upward of three times the price they would pay to other providers, according to an investigation by Kaiser Health News.

The outlet noted that one Sacramento, California, doctors’ office got an insurer to pay $85 for a flu shot that it offered to uninsured patients for $25.

The world finally has an approved vaccine against Ebola

Regulators in Europe have granted the world's first approval of a vaccine against Ebola—and health officials are wasting no time in rolling it out.

The European Commission announced at the start of the week that it had granted a landmark marketing authorization of Merck's Ebola vaccine Ervebo. The vaccine has been in the works since the 2014 West African Ebola outbreak. It is now being used in the ongoing outbreak in the Democratic Republic of Congo based on a "compassionate use" protocol.

The current outbreak in the DRC has killed nearly 2,200 since August 2018, causing nearly 3,300 cases. The outbreak is the second-largest recorded, surpassed only by the 2014 West African outbreak that caused more than 11,000 deaths and 28,000 cases.

Hundreds of dubious medical exemptions handed out by California’s infamous anti-vaccine pediatrician, Dr. Robert Sears, would be revoked under fresh amendments to a state bill designed to boost vaccination rates.

The bill, SB 276, aims to crack down on bogus medical exemptions, which surged in the wake of the state’s 2015 law eliminating vaccine exemptions based on personal and religious beliefs. Dr. Pan was prompted to author the bill after discovering that some “unscrupulous” doctors had been exempting children from vaccine requirements based on questionable or outright sham medical reasons—sometimes for hefty fees. The exemptions left some communities under-protected from vaccine-preventable illnesses.

“We’re embarrassed”: US is close to losing measles-elimination status

There’s a “reasonable chance” that the US will soon lose its status as a country that has eliminated measles. That’s according to Dr. Nancy Messonnier, director of the National Center for Immunization and Respiratory Diseases at the Centers for Disease Control and Prevention.

The World Health Organization considers a disease eliminated from a country or region if it has gone at least 12 months without continuous spread of said disease. (This is different from disease eradication, which is when a disease is completely stamped out globally. Humans have only managed to eradicate two diseases: smallpox and rinderpest, which infects cattle and other ruminants.) 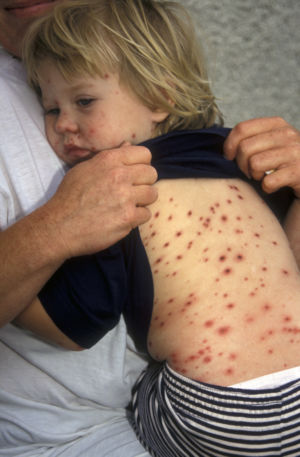 Child with chickenpox rash on her back held by her mother. (credit: Getty | Photofusion)

Judges in Kentucky have handed down another legal defeat to the unvaccinated teenager who sued his local health department for banning him from school and extracurricular activities amid a chickenpox outbreak earlier this year.

The Kentucky Court of Appeals on Friday quietly sided with the health department, saying that it was acting well within its powers to protect public health. The appeals court quoted an earlier ruling by the US Supreme Court saying that “Of paramount necessity, a community has the right to protect itself against an epidemic of disease which threatens the safety of its members.”

The Northern Kentucky Health Department declared the latest court decision a “resounding victory for public health in Kentucky,” in a statement.

Anti-vaccine advocates received a blow in New York Thursday as state lawmakers banned non-medical exemptions based on religious beliefs—and there may be more blows coming.

“As evident from the measles outbreaks currently impacting communities in several states, when individuals are not immunized as a matter of personal preference or misinformation, they put themselves and others at risk of disease,” AMA Board Member E. Scott Ferguson, M.D. said in a statement. “The AMA strongly supports efforts to eliminate non-medical exemptions from immunization, and we will continue to actively urge policymakers to do so.”

Ebola spreads in Uganda, but not an international emergency, WHO says [Updated]

UPDATE 6/14/2019, 1pm ET: The World Health Organization's Emergency Committee met today to discuss the spread of Ebola outbreak and declared (for the third time) that the ongoing outbreak does not constitute a “public health emergency of international concern" or PHEIC. It is an emergency for the Democratic Republic of the Congo and the region, but does not meet the criteria for an international public health emergency, the committee concluded. Original story from 6/13/2019 follows.

Local and international health officials are scrambling to smother a flare-up of Ebola in Uganda, which spread this week from a massive, months-long outbreak in the neighboring Democratic Republic of the Congo. The outbreak has sickened 2,084 and killed 1,405 since last August.

Uganda announced its first case stemming from the outbreak on Tuesday, June 11. The case was in a 5-year-old Congolese boy who traveled across the border with family a few days earlier. The Ugandan Health Ministry reported shortly after that the boy succumbed to his infection the morning of June 12. Two of his family members also tested positive by that time: the boy’s 50-year-old grandmother and his 3-year-old brother.

Today, June 13, the Ministry announced that the grandmother had also passed. In an urgent meeting over the situation, officials from Uganda and the DRC mutually decided to send the remaining family back to the DRC. That includes the 3-year-old boy with a confirmed case, as well as the mother, father, a 6-month-old sibling, and their maid. Health officials noted that the latter four family members are all considered “suspected cases.”