Archive for the ‘ECG’ Category 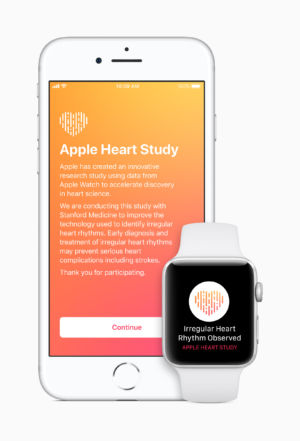 In a large Apple-sponsored study assessing whether the pulse sensor on older versions of the Apple Watch (Series 1, 2, and 3) can pick up heart rhythm irregularities, researchers found that only 34 percent of participants who received an alert of an irregular pulse on their watch went on to have a confirmed case of atrial fibrillation, a common type of irregular heart rhythm.

The study was led by researchers at Stanford, who presented the results Saturday in New Orleans at the annual meeting of the American College of Cardiology. The results have not been published in a scientific journal and have not been peer-reviewed.

The study, dubbed the Apple Heart Study, began in November 2017, before the release of the Apple Watch Series 4, which includes an electrocardiograph (ECG) feature for monitoring heart activity. Though the study didn’t keep pace with that of wearable device development, it was rather speedy relative to clinical trials. In fact, some cardiologists were impressed simply by the short period of time in which the study was able to recruit such a large number of participants—nearly 420,000—plus follow up with them using telemedicine and get results.

If developing heart disease scares the poo out of you, this new monitor may be just the thing.

Engineers at Rochester Institute of Technology have designed a high-tech toilet seat that effortlessly flushes out data on the state of your cardiovascular system. The tricked-out porcelain throne measures your blood pressure, blood oxygen level, and the volume of blood your heart pumps per beat (stroke volume)—taking readings every time you sit down to catch up on some reading of your own. The engineers, led by David Borkholder, recently published a prototype of the seat in the open-access journal JMIR mHealth and uHealth.

According to the inventors, the seat’s daily data dump could make patients and their doctors privy to early warning signs of heart failure, potentially helping to prevent further deterioration and avoid costly hospital stays. Moreover, the seat could ease in-home monitoring for heart patients, who often strain to consistently track their tickers with other, non-toilet-based monitors.

Withings has had a tumultuous couple of years. The company was bought by Nokia only to be re-acquired by its original owner Éric Carreel last May. While it sells smart scales, thermometers, and other health electronics, the French company has an uphill battle ahead of it in the wearable space thanks to an oversaturated market. But it's aiming high with its newest device: the $129 Withings Move ECG targets those who want a more affordable device to measure electrocardiograms at home than the $350 Apple Watch.

Like Withings wearables of yesteryear, the Move ECG has an analog face but includes most of the smart technology inside that you'd expect from a modern wearable. The kickers are its three electrodes that measure electrocardiograms, two of which are embedded into the body of the watch while the third sits in the watch's bezel. To take a reading, users need to touch both sides of the bezel at the same time while wearing the watch and wait about 30 seconds for it to take a measurement.

The process sounds nearly identical to that of the Apple Watch Series 4, which has one circular electrode on its underside and one smaller electrode on its Digital Crown. The Move ECG sends that data to Withings' Health Mate mobile app so you can see if your heart beat was normal or if any signs of atrial fibrillation were detected. Data accumulated over time can be seen in larger charts and graphs in the app, and that data can be exported so users can easily share it with their doctors. As of today's announcement, the Move ECG is currently under review for FDA clearance (the Apple Watch Series 4's ECG app and its irregular rhythm notification have FDA clearance in the US).

A look at the Apple Watch’s ECG, from someone who needs it

When Apple introduced the fourth iteration of its smartwatch, the big new selling point wasn't a feature we typically associate with a watch or any sort of smart device. Instead, the company added a feature that had only recently arrived in the form of specialized consumer devices: an electrocardiograph (ECG), a device made for monitoring the heart's electrical activity.

But the watch was ready before the software was, meaning an examination of the technology wasn't possible in our comprehensive review of the Apple Watch Series 4. Last week, Apple finally enabled the missing features, and we've spent a few days checking them out.

People who haven't used the Apple Watch may not realize just how much it's an extension of an iPhone. This includes the heart-monitoring software, which requires an update to both the Watch and iPhone OSes before it will work. (This caused a small bit of confusion when the software wouldn't launch after we upgraded only the watch's OS.) Once the update is done, the Health app on the iPhone will incorporate any ECG data generated using the watch. On the watch side, the update will install a new app.

The newest update for Apple Watches is out now, bringing a highly anticipated feature to Series 4 devices. Apple pushed out watchOS 5.1.2 today, which includes its ECG app for monitoring irregular heartbeats.

Apple Watch Series 4 devices all have built-in electrodes that can measure electrocardiograms, or ECGs. At the time of the Watch's debut in September, Apple's native app with which the electrodes communicate wasn't ready for consumer use. Now, it's rolling out as part of the watchOS 5.1.2 update.

The ECG app is for the Watch itself, while ECG data gets stored in Apple's Health app on iOS devices. To take an ECG reading, users must place their finger on the flat side of the Digital Crown on their Series 4 Watch. The electrode on the Digital Crown communicates with the other electrode on the Watch, which sits near the heart rate monitor, to take a complete ECG measurement.